The next time you pick up your flip, or turn on the video recorder on your phone, consider shooting the "reaction". It's usually just as important as the action of the story.
This is something I learned working in a newsroom. You see, when a news videographer is sent out to cover a story, it goes without saying they will shoot the "action". If there's a fire, they'll shoot the flames. If they're shooting a football game, they'll show you the touchdowns. When they cover a trial, they shoot the judge reading the verdict.
But that's only part of the story. A great videographer knows the "reaction" is just as important. During a fire, imagine the faces of those watching the flames. Seeing how they react is a vital part of the story. During a football game, if you see the player's mother react when he scores the touchdown, you have a personal investment in the story. During a trial, the real emotion is on the defendants face when the verdict is read.
The same goes for home videos. Instead of just shooting the kids tear open the presents on Christmas morning, it would be great to see Grandma's reaction. After you show your son blowing out the candles on his birthday cake, turn the camera to his sister's reaction-- I bet it's priceless.
The emotion of a story is often in the eyes of the people watching... so the next time you're taping a family event-- don't forget to shoot the reaction.
Posted by Carrie Ferenac at 5:46 PM

Carrie Ferenac
After working as a television news producer for twelve years, I founded Convention News Television with Marcelo Zolessi and Kevin Crouch. We now bring tv professionals to conventions, events and tradeshows to create video coverage. The videos are distributed online to market the event, and deliver information. 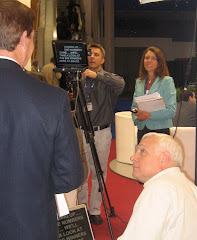